As previously hinted, here’s another update to close out 2021. The previous batch of new cards brought together the Toa Mata that had been coming out one by one into a single strategy, and now it’s time to repeat that for the other archetype I have been dripfeeding across the village releases: The Chronicler’s Company, or C.C. Matoran for short.

For a detailed description of how this new strategy plays, refer to their Theme Guide. Or check out Turaga Nui Turbo for a somewhat less reasonable way to use them in conjunction with some other new cards from this release. 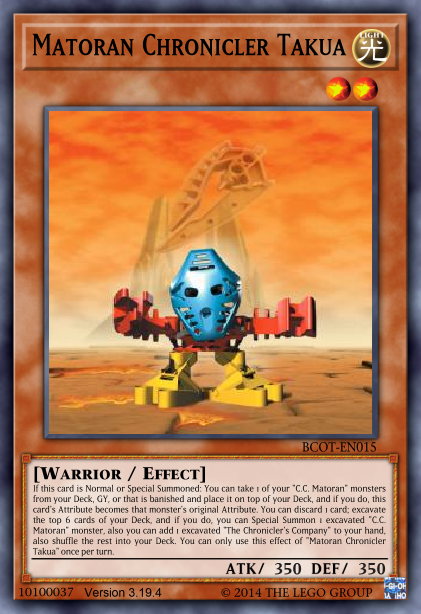 If this card is Normal or Special Summoned: You can take 1 of your “C.C. Matoran” monsters from your Deck, GY, or that is banished and place it on top of your Deck, and if you do, this card’s Attribute becomes that monster’s original Attribute. You can discard 1 card; excavate the top 6 cards of your Deck, and if you do, you can Special Summon 1 excavated “C.C. Matoran” monster, also you can add 1 excavated “The Chronicler’s Company” to your hand, also shuffle the rest into your Deck. You can only use this effect of “Matoran Chronicler Takua” once per turn.

First and foremost, let’s talk about Takua, the hidden protagonist of the Mata Nui saga and the Chronicler who gathers the Company. True to his role, his effects allow him to “set his sights” on one of his comrades (matching their Attribute in the process, as a reference to his Av-Matoran color changing abilities) and then “travel” through the six villages to pick them up.

This sounded good on paper, but after testing, I’m starting to feel like I messed up here a little. Since Takua will stack one of the very targets he excavates for on top of your Deck every time you Summon him, the excavation is completely meaningless and the effect may as well just be to Special Summon a C.C. Matoran from any location except the hand at the cost of a discard. The reason he does this is because I wanted him to give 1-card access to the Turaga in each Koro deck (instead of having to come up with six different cards to do that), and since you only run one of the C.C. Matoran in each of those, blind excavation wouldn’t have had a sufficient hit rate. To add back a bit of the gambling excitement, I included a secondary payoff where you get to add the archetypal Trap should you come across it, but in the end that still means there are zero surprises in the Summoning part, and having the chance to offset the discard cost like that may even be a bit too convenient.

The better solution is probably to simply have the stacking happen only on Normal Summon, which I may do in a future update after doing some proper testing with Takua in the Koro decks. An unfortunate detail is that the Attribute change and stacking on Special Summon are integral to one of my favorite parts in the Turaga Nui Turbo combo, but I’m willing to sacrifice that since it’s just a gimmicky side strategy. However, I remain not entirely convinced this is the correct fix, so I’d very much appreciate hearing some outside opinions. 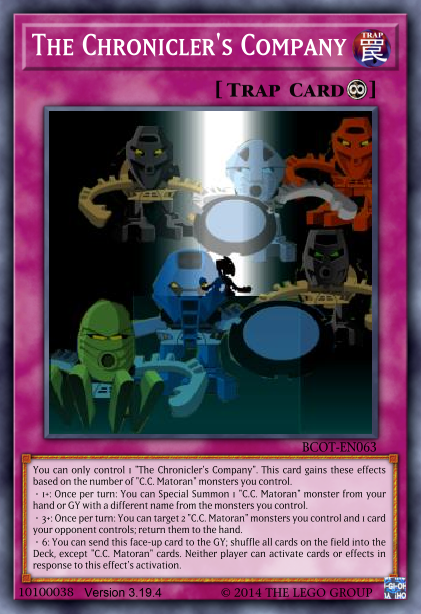 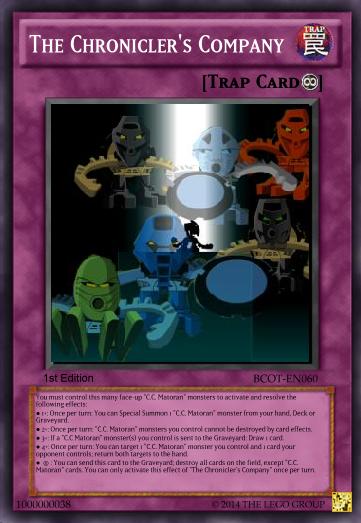 Since I mentioned the archetypal Trap up there, I guess I should go over it as well, though there isn’t really much to say. Like its original from back in the day, The Chronicler’s Company accumulates helpful effects as you gather more members of its namesake, but they have been slimmed down to the most significant ones and tweaked a bit. The 1+ tier no longer includes a free Summon from the Deck (since that tends to be a bit broken) and only lets you get those members you don’t have already, the previous 4+ tier is now at 3+ and downgraded to a 2-for-1 trade (it’s still disruption either way), and the previous 5 tier got moved to the more appropriate 6 (thanks, Extra Monster Zone!) and buffed a whole lot because if you ever get there you’ve pretty much won and might as well get to do it in a flashy way. 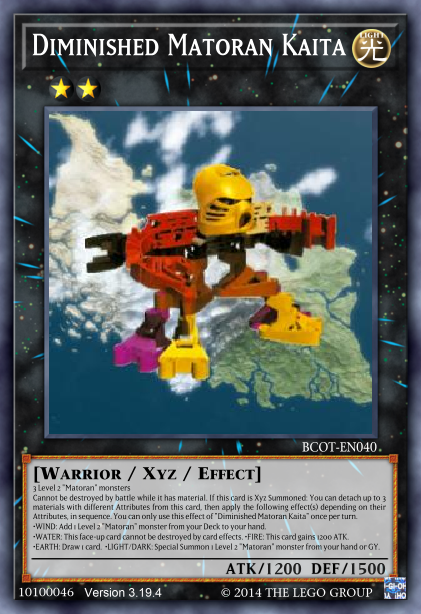 The Diminished Matoran Kaita went through a few design iterations which all focused on the concept of getting different effects based on the Attributes of its materials, and the one I ended up liking best was immediately detaching the Attributes whose effects you want when its Summoned. This means it’s best when summoned with Matoran of different elements, as it should be (disregarding the lack of STONE and ICE Attributes), and you may run into the interesting dynamic of having to choose between detaching the third material for the effect or keeping it for the battle protection.

The effects themselves are mostly just meant to align with the respective village’s playstyle while remaining generically useful, but it’s a bit concerning that a triple detach of WIND + EARTH + LIGHT/DARK works out to a +1 even factoring in the 3 materials that need to go into the Kaita. May still have to tweak at least one of these effects so it doesn’t give immediate advantage. 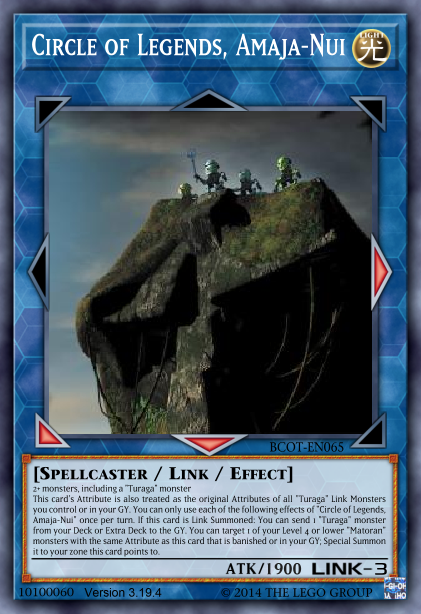 2+ monsters, including a “Turaga” monster
This card’s Attribute is also treated as the original Attributes of all “Turaga” Link Monsters you control or in your GY. You can only use each of the following effects of “Circle of Legends, Amaja-Nui” once per turn. If this card is Link Summoned: You can send 1 “Turaga” monster from your Deck or Extra Deck to the GY. You can target 1 of your Level 4 or lower “Matoran” monsters with the same Attribute as this card that is banished or in your GY; Special Summon it to your zone this card points to. 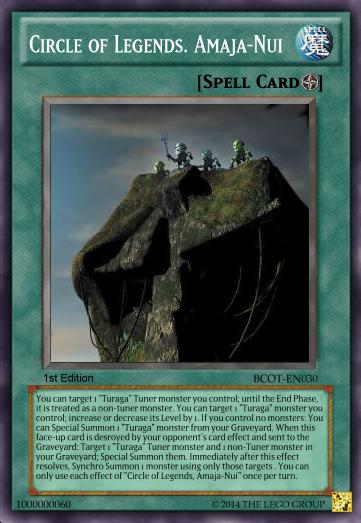 The Turaga get a collective updgraded form in Amaja-Nui, which, curiously enough, used to be a Field Spell in the original version. And that makes sense since it is a location, but in order to avoid adding another name to Mata Nui’s search targets and to give the Turaga an easy Link climbing route (which I often felt was missing when testing the villages), this time I chose to focus on Amaja-Nui’s nature as a gathering of Turaga instead. For some reason group shots are within the design space of Link (and Fusion?) Monsters, so this makes it an entirely valid choice for a Link-3.

The two main effects are pretty simple – take on the Attribute of any Turaga you have around (as it’s the gathering of exactly those) and call previously used Matoran of that Attribute back to the field (since the Turaga have authority over them), which should be decently useful to any of the villages. For the sake of Turaga Nui Turbo specifically, it can also send a Turaga from your Main or Extra Deck to the GY when Link Summoned, which could be either the big boss itself or just an additional name and/or Attribute. 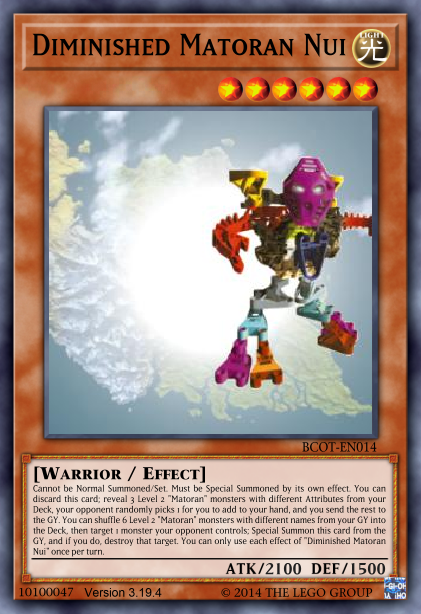 Cannot be Normal Summoned/Set. Must be Special Summoned by its own effect. You can discard this card; reveal 3 Level 2 “Matoran” monsters with different Attributes from your Deck, your opponent randomly picks 1 for you to add to your hand, and you send the rest to the GY. You can shuffle 6 Level 2 “Matoran” monsters with different names from your GY into the Deck, then target 1 monster your opponent controls; Special Summon this card from the GY, and if you do, destroy that target. You can only use each effect of “Diminished Matoran Nui” once per turn. 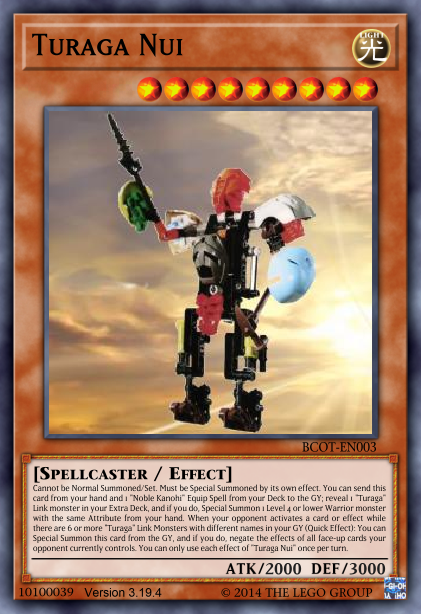 Cannot be Normal Summoned/Set. Must be Special Summoned by its own effect. You can send this card from your hand and 1 “Noble Kanohi” Equip Spell from your Deck to the GY; reveal 1 “Turaga” Link monster in your Extra Deck, and if you do, Special Summon 1 Level 4 or lower Warrior monster with the same Attribute from your hand. When your opponent activates a card or effect while there are 6 or more “Turaga” Link Monsters with different names in your GY (Quick Effect): You can Special Summon this card from the GY, and if you do, negate the effects of all face-up cards your opponent currently controls. You can only use each effect of “Turaga Nui” once per turn.

The Diminished Matoran Nui and Turaga Nui both are powerful entities formed by combining 6 individuals, and they both reflect this through the same design principles. They provide an effect in the hand that trades them for resources which help their respective components, and an effect in the GY that summons them with great impact once you have gathered all six of those components.

Setting up 6 Level 2 Matoran in the GY is fairly easy, so the payoff there is “only” destroying a single monster and getting a decently big body on the field, and it returns the individual Matoran to the Deck so you can’t repeat it right away. On the other hand, getting 6 Turaga Link Monsters in the GY is a fool’s errand that takes something stupid like Turaga Nui Turbo to accomplish within reasonable time, so the Turaga Nui actually lets you keep that setup and just negates your opponent’s entire field when you do manage to Summon it.

Time was a bit short since I squeezed this into what was left of the month, so I ended up only implementing one of the changes to existing cards I contemplated here and there. That one is Kopeke, who now has a drawback when searching non-WATER monsters. 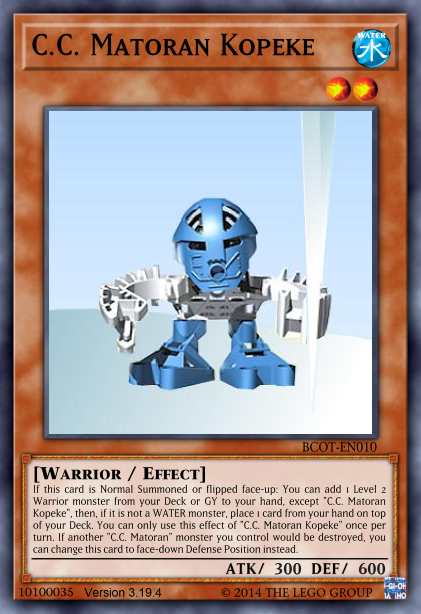 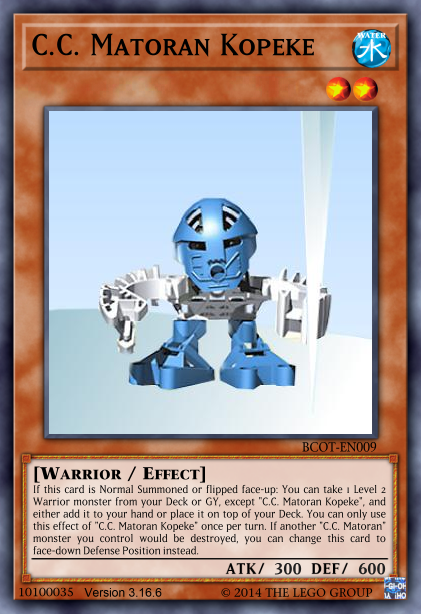 If this card is Normal Summoned or flipped face-up: You can take 1 Level 2 Warrior monster from your Deck or GY, except “C.C. Matoran Kopeke”, and either add it to your hand or place it on top of your Deck. You can only use this effect of “C.C. Matoran Kopeke” once per turn. If another “C.C. Matoran” monster you control would be destroyed, you can change this card to face-down Defense Position instead.

This replaces the previous weird option to put the card you search on top of your Deck instead of adding it to your hand, which I can now reveal was meant to synergize with Takua’s excavation effect, since Kopeke is himself a future Chronicler. Just kind of unfortunate that Kopeke takes up the Normal Summon, getting Takua with something like Isolde ends up shuffling the Deck, and even using the Matoran Kaita to Special Summon him from hand or GY requires him as the LIGHT/DARK material to begin with, but eh, there are theoretically possible scenarios where it could work.

Anyway, there are two reasons I really like this change from a design standpoint: One, the idea behind Kopeke being the searcher is that he “shapes the hand” as a skilled ice crafter, and that really fits now that he can also remove unneeded elements from it. Two, his shy personality that was already reflected in his protection effect flipping him face-down is further highlighted by the fact that he becomes less effective when interacting with strangers from outside his village. But due to the limited Attributes available, it turns out he’s still completely fine with the ladies from Ga-Koro. What a chad.